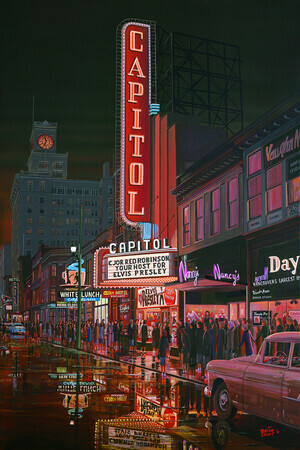 Attracting over 6000 patrons, mostly teenage girls on opening day, Elvis Presley’s first movie, Love Me Tender, opened at Vancouver’s Capitol Theatre on November 28, 1956, That day ads in the Province newspaper announce that "Mr Music", Red Robinson of Station 600 CJOR would be emcee at a "girls only" 50 cent admission, 9:45am matinee on Saturday, December 1. Red would also be doing a live broadcast at the Capitol that same evening. Red, who assisted me with this painting, tells this story in his own words:

“I was this young upstart kid on the radio working for CJOR and my music did not sit well with many in the media including my own coworkers. That changed in the coming years.

“The premiere of Elvis' first movie, "Love Me Tender", was at the Capitol Theatre in 1956. The Capitol’s manager was Charlie Doctor and he was a promoter of the first order. I was asked to be emcee for the opening but I had a major dance on Vancouver Island the night before. I played to a crowd of over 1,000 teenagers in Duncan in the curling rink (no ice on the floor at the time). The next day, I had to be at the Nanaimo ferry slip at 6 a.m. to put me back in Vancouver in time for the matinee. It was a close call as the ferry arrived in Vancouver at approximately 8 a.m. The girls only Saturday morning show (matinee) ran as advertised at 9:45 a.m. I stepped on stage with a guitar and got a few laughs as I couldn't play a thing. The girls went mad at just the mention of Elvis’ name. We gave out prizes such as records and photos of Elvis and the show began. The girls screamed all the way through the movie whenever Elvis appeared on the screen. The movie was an average "oater" as we called western's in those days but it mattered not to the fans.

I also emceed the night show at 7:20pm. After that, our (CJOR) radio remote was "live" with me in the lobby of the Capitol Theatre starting at 8:05pm until 9:00p.m. We interviewed people coming into the theatre and in particular I had invited anyone named Presley to be our guests and 15 showed up. That was fun. This was all new and exciting at the time.”

There is absolutely nothing better than having an eye-witness to a historical event that one is painting and Red Robinson has been very helpful to me as I tackled this project. For my main painting reference I used the large black and white photograph currently hanging in Red Robinson Theatre and then modified the view in a number of ways to improve the scene. I decided to paint the Saturday night 7:20pm show with all the neon blazing around the Capitol marquee. The line-up, mainly girls, extended down Granville Street and they were all bundled up on that cold December evening. Bobby socks and saddle shoes were very “cool”; silk hair scarves were practically mandatory and overcoats were stylishly baggy with exaggerated collars. Incidentally, on the 4th of December Vancouver received a crushing 15 inch dump of snow which caused considerable havoc.

Red, thank you for your energy and enthusiasm and for making sure we don’t forget what it was like to be young, bobby socks and all.