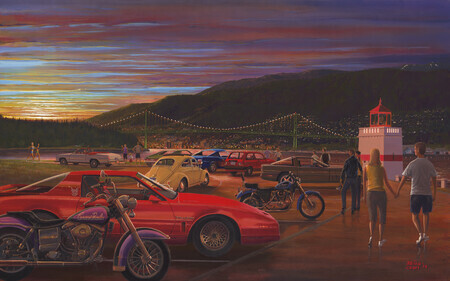 As early sailors approached Vancouver through First Narrows at Prospect Point they were guided by a lighthouse built there in 1888. Their next point of navigation was Brockton Point which they would round in a starboard turn to enter Vancouver’s Coal Harbour.

Brockton Point was named after Francis Brockton, engineer of the HMS Plumper, who discovered a coal vein in Coal Harbour. As the most easterly extension of Stanley Park, the point provides a useful sheltering protrusion for Coal Harbour but it was also an obstacle of significant menace to vessels under way in low visibility weather. In 1890 a second navigation light (red and white lanterns on a pole) was installed at Brockton Point. Despite the lights several maritime accidents occurred necessitating the installation of two coordinated semaphore stations one at Brockton Point to control outgoing shipping and the other at Prospect Point to control incoming shipping. In 1914 a modest 35 foot lighthouse tower was built at Brockton Point straddling the seawall walkway.

In 1938, Lions Gate bridge rose as a brilliant symbol of Vancouver’s emergence from the preceding nine years of the great depression. Gracefully spanning the harbour entrance at Prospect Point, it made the north shore accessible for expansion and development and at the same time the former semaphore station at Prospect Point was moved to the centre of the bridge just above the main cables.

Although de-staffed in 1956, the Brockton Point lighthouse was preserved as historic site. Today, the point offers stunning views through a three-hundred degree arc, clockwise, from First Narrows and the Lions Gate Bridge to Coal Harbour and the city and has always been a popular stop for visitors and tourist in Stanley Park. On February 19, 1986, the year Vancouver hosted EXPO 86, Lions Gate bridge was illuminated by 170 mercury vapour lights, culminating a project spearheaded by Social Credit MLA and Cabinet Minister, Grace McCarthy and funded by the Guiness family, the original developers and owners of the bridge. That summer a visit to Stanley Park to the view of the bridge from Brockton Point at sunset was a very popular thing to do.

It was this iconic night-view of Lions Gate Bridge from the point that attracted my attention and I painted the scene from warm memories and a with a romantic eye, hoping to create it just as it was in the summer of 1986. I began by creating the dwindling light at dusk to accentuate what I hoped would be a stunning view of Lions Gate Bridge against the twinkling backdrop of the north shore lights. The details of the bridge deck correctly depict the original structure prior to the re-decking in recent years. The best part came toward the end of the work when I felt completely free to add cars, motorcycles and people to the painting. With warm respect my final brushstrokes added the words “Grace’s Pearls” to the fuel tank of the motorcycle in the foreground, my personal thank you to the Grace McCarthy, the woman responsible for lighting up our beloved Lions Gate Bridge.